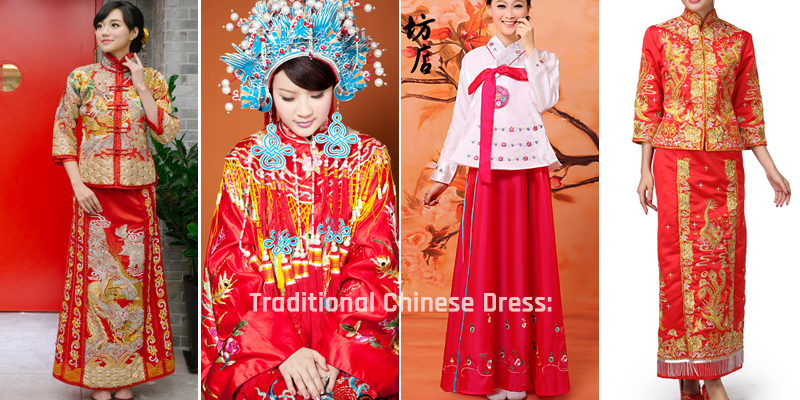 Every country around the world has its own unique tradition. It’s the dressing code that highlights the background of their cultural background and the tradition it holds. Dressing doesn’t only to mean to impress, dressing reveals your personality. There’s a lot of dressing manufacturers have come up with numerous modern version dress designs which one can wear every day. One’s dressing sense portrays a picture of their style and taste.

There is something really interesting about Chinese culture is throughout every dynasty in Chinese history their clothing style statement would adapt to the new dynasty that will last till the end of that dynasty. The basics of Chinese clothing and fashion bloomed during the Shang dynasty. Back then people wore dresses that mainly looked like tight shirt that was narrow cuffed knee length and tied with a sash and an ankle-length skirt with a piece of cloth that was hanged down till the knees. Clothes were generally in vivid primary colours that mostly included green and clothing varied according to jobs and different people. But later with the arrival of another new dynasty, due to strict social hierarchy people became choosy and picky with the types of clothes they wore. Clothing during this time distinguished a lot of things as per colour, style and designs and marked a statement that depicted class, rank and status. A particular dressing code was not allowed to wear by any other class and if anybody dared may God save them. Later came in trend the style of wearing jackets that continued dynasty after dynasty. The jacket was designed with a short jacket or waist length jacket tucked inside a skirt of floor length with a long soak bell with a piece of ring war of that dynasty that was tied around the waist and a cotton Shaw that was wore around the arms. Later over the years came the style of loose one piece clothing with long sleeves.

As years passed so did change the style of clothing culture. It can be seen Chinese were fearless in mixing anything to their clothing. At first whenever they came up with new dressing style and fashion was not accepted but later those were followed almost by every fashion industry.

Modern dressing style which is commonly known as Qi Pao or Cheongsam has a variety of new styles and trends that looks not only attractive but also very much fashionable which has been highly accepted in today’s world of fashion.

Normally a traditional Chinese dress is very silky with different fabric designs that give a very formal look. Few current styles are discussed below.

There are few outfits that are knee length tight fit one piece dress with a side cut beside the knees which makes it comfortable and easier to walk around and has embroidery work in the front with a contrast colour. Another set of outfit comes with a combination of dark contrast colours such as red and black and length is shorter than knee. This also tight fit clothing which gives a pretty feminine look that is modern yet very simple looking and very much in fashion. Another style of outfit is mainly like a top with a mandarin collar which is wore with skin fit trousers which seems to be a fun and casual outfit. This kind of outfit can also be mixed and wore with short skinny skirts that will flaunt the fashion statement.

Thus it seems these Chinese dressing styles have marked a statement in the fashion world which is classy and modern at the same that can never go out of fashion trends.