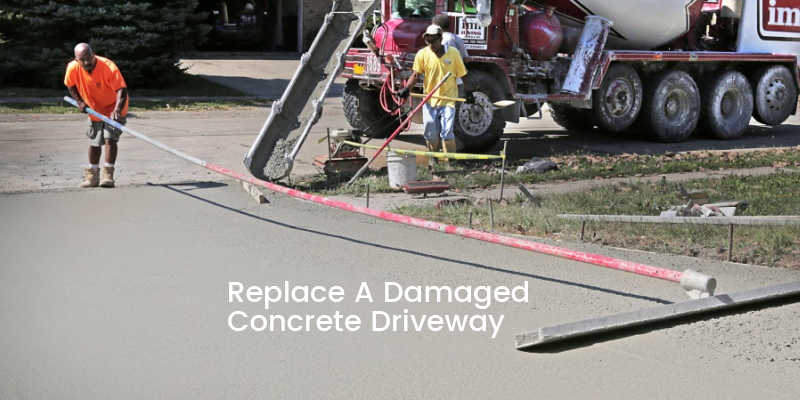 Repair or Replace a Damaged Concrete Driveway: which is better?

At times, when the concrete driveway is exposed to prolonged use, it may so happen that cracks appear at surface of the same. But these cracks remain confined to a small portion of the driveway or to a few areas which can be dealt with via repairs only. In such cases, a little cement or slurry along with a putty knife does the trick of undoing the damage easily and in a cost-effective manner.

But when you have used your concrete driveway for about 20 to 25 years and large portions of the same have become heavily damaged, then repairing may not be a good idea. Although it will be cheaper than replacing the damaged concrete driveway, it won’t be long lasting and you would need frequent redoing of the repairing to maintain the same which would pose to be costly on the long run. In such cases, it is best to completely replace the driveway and get a new one in place. Following are some of the instances when replacing would be a better option than repairing a damaged concrete driveway.

While cost may be an issue when it comes to choosing between replacing or repairing, you should give first priority to the type of damage that has occurred in the concrete driveway. The cost of a repair usually varies depending upon the area of damage and the technique that has been used. However, replacement of a damage concrete driveway may cost you about $6 to $9 per square foot.

When you are in Seattle and are confused whether to replace or repair a damaged concrete driveway, you can rely on the sound advice of Sound Concrete Co. Sound Concrete Co is an expert when it comes to laying or repairing concrete and they are proud of their durable, properly finished and strong concrete works that will provide you with the value for money. They have the reputation of being one of the best concrete workers of Seattle for the past two decades and proudly serve the likes of Bellevue, Shoreline, Federal Way, Bothell, Issaquah etc. Sound Concrete Co uses the ASTM standard for judging their concrete strength and also uses stealth fiber to further prevent the appearance of cracks on concrete driveways.

So what are you waiting for? Call Sound Concrete Co now and get the best solution for your damaged concrete driveway.