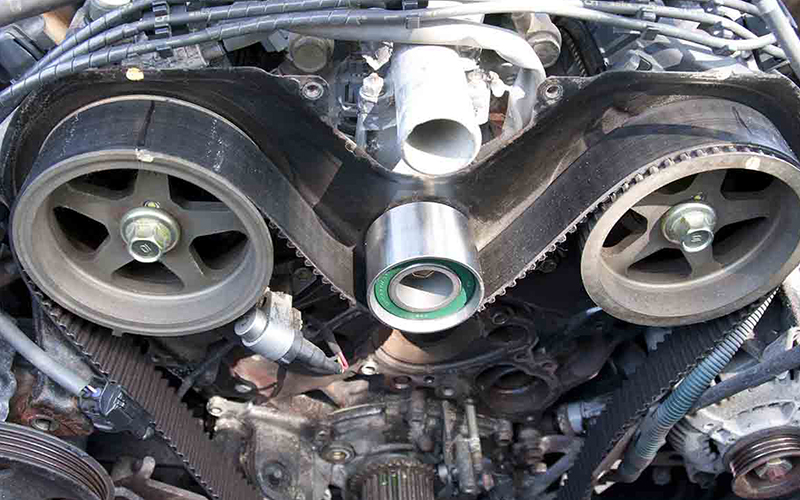 What is a Timing Belt?

Chances are that if you have a car or if you happen to love cars you came across the term Timing Belts. If the engine is considered the heart of the car, the Belts may be considered as the muscles. It is essential to keep the Crankshaft and the Camshaft in a proper and the rhythm and lo behold, humans came up with the perfect solution, the Pu Timing Belts. Simply put, its works much like the chains of the bicycle, only it’s a bit more complicated. Let me explain.

How does it work?

The crankshaft in the engine is what makes the car move. It spins as a result of the explosion taking place in the piston chamber above, due to the fuel mix. A Timing Belt is connected to the crankshaft, which in turn makes the camshaft spin in perfect synchronization. In case you are wondering what a camshaft is, it’s another spinning rod located above the crankshaft. Its job is to open the outlets and inlets of the valves, letting in the fuel and air and releasing off with the burnt gases, from inside the piston chamber.

The Timing Belt is responsible for the perfect functioning of these two parts. Since the belt is made of rubber, it is doomed to break off one day. With some cars, it is an easy fix. Just reattach another belt and you’re done. However, if you happen to be one of those unfortunate of souls, devoid of the Almighty’s, the breaking of the Belts is the beginning of a long line of misery. You see, when the shaft breaks, the synchronization is disturbed and reattaching the belt won’t fix the issue. It has to realign to match the rhythm of both the shafts, which in itself, is a long painstaking process.

Consequences of a broken belt

Usually, when the engine is in complete sync, there aren’t any such problems. However, there are engines where the distance between the valve and the piston isn’t too much of a deal. When the belt breaks he piston may rush up, and smash right into the valve. The result is a slightly bent valve, which not only cripples the car but also damages it over time like some slow acting poison. The bent valves will obviously interfere with the fuel mix intake and exhaustion going into and coming outside of the piston chamber respectively.

How can I fix this?

In a bent valve scenario, judging from the above statement, you must have understood that changing the Timing Belt isn’t an option. If by some miracle if you manage to do so and bring your engine back “on time”, the bent valves will still interfere with the performance of the engine and keep damaging it over time. Doing a whole engine tune up, or a “valve job” will cost a fortune in itself. There will be some other expenses as well which includes the replacement of the damaged parts.

Can I avoid such a catastrophe?

Fortunately, the answer is yes. You can avoid this whole charade by keeping a watchful eye on the distance counter and keeping a mental note on how old you Timing Belt really is. There is a recommended time for changing the belts, and they are there for a reason. Make sure to change those rotten belts in that recommended period and don’t wait for them to completely break. By changing the belts at regular intervals, usually after traveling around 100,000 miles, you can save yourself from the trouble of having to face such a dire situation, as, ending up with a broken Timing Belt.